Doctor Henry West MD is the mysterious owner of the mansion where Splatterhouse takes place. He was born sometime in the late 17th or early 18th century. He is portrayed by Richard Doyle.

Dr. West made no actual appearance in the story and was only mentioned in the instruction manual for the 1990 home port. According to it, Parapsychology students Rick Taylor and Jennifer Willis went up to see his mansion. Based upon the conditions of the West Mansion and promotional artwork, Dr. West was experimenting on and torturing several bizarre creatures. This is not explained in the Arcade version, which is more ambiguous.

In the context of the TurboGrafx-16 version, it can be assumed that the Hell Chaos creature was a mutated form of Dr. West's corpse.

The character of Dr. West does not appear in this game, but the diary that Rick reads to learn about the void between Stage V and Stage VI is said to be property of a "West" in the Japanese manual. The laboratory in the previous area is also said to be where he did his experiments, so it is speculated by the Japanese fandom that the feeble boss is a transformed West. This detail is lost in the English release, in which another unseen figure called Dr. Mueller is mentioned in the localized manual.

Dr. West has a stronger role in this version of the story.

Dr. Henry West is a mysterious professor at Miskatonic University, the owner of West Mansion and supposedly one of the long line of the West family to reside in Arkham.

He sent an invitation specifically to Jennifer Willis to visit his mansion and write an article about him for the university newspaper, but unexpectedly, her boyfriend decided to come with her. As soon as the young couple get inside his mansion, everything goes terribly wrong. West kidnaps Jennifer, while his demonic minions disembowel Rick. He then drags her through time and space in a bid to sacrifice her to his gods and begin the end of the world.

West's experiments over the years claimed the lives of hundreds, if not thousands, as he attempted to use arcane magics and science to create suitable host vessels for The Corrupted. He also created most, if not all of the creatures in the game at the command of his gods, all of them used to be humans. The goal was to create durable servants that would carry out his masters' will. He came to look at these creations as his children.

It is revealed through the story that Dr. West's wife, Leonora West, died from cholera. He was a respected doctor and healer who saved many from the disease, but could not save his wife and this pushed him towards the edge of insanity and suicide. He was contacted by an unknown entity and given the key to do what he desired, to bring Leonora back to life. After using arcane knowledge to resurrect her, he finds that what he gained was not the return of his wife, but of something else, something inhuman. He then devoted his life to protecting "her."

When the townsfolk of Arkham lured him away on pretense of curing a sick man, a mob abducted his wife from the mansion and sentenced her to death by fire in a large wicker man. As West raced back to save her, he witnessed Rick wearing the Terror Mask kill his wife before he teleporting away. This set him on the dark path that would drive the future Terror Mask's plan to get back at the corrupted. The act finally drove Dr. West past the breaking point as on that very night, he devised his plan to get back at Rick and bring Leonora back to life. After finding a way to contact the The Corrupted, he believed that if he helped them, he could be reunited with her and to achieve his goal of removing the suffering that plagued mankind by ending all life on Earth.

Rick Taylor managed to catch Dr. West before the sacrifice could begin, ripped off Dr.West's arm and attacked him with it. However, this did not stop the arrival of one member of the Corrupted, as the Terror Mask used Rick for its own ritual, which required the deaths of ten thousand creatures. Several reanimated corpses of the monsters that Rick killed fall off the Corrupted member, forcing Rick to defend Jenny from them. Rick then uses his Beserker Form to kill the creature. At the end of the fight, an entity enters Jennifer's body. Dr. West calls out to Jennifer in hopes that the soul of Leonora West had possessed Jennifer. The game ends with a cliffhanger, leaving his fate unknown. Then he died to a one arm disease.

West and his minions. 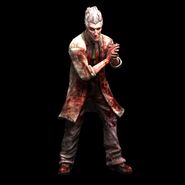