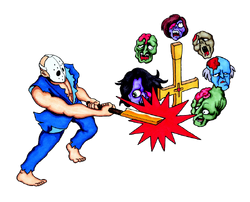 The Evil Cross was an boss in the original Splatterhouse. It was the boss of stage 4, The Church.

The cross itself does nothing but float from one side of the screen to the other. Instead the cross appears to control a seemingly endless supply of zombie (or Demon) heads, which it uses as a barrier to protect it from a direct attack from Rick. It will throw more heads from the side of the screen at Rick with the intention of doing damage.

In order to defeat the Evil Cross, Rick must first get rid of as many of the floating heads as necessary to open up access to direct attack. Rick must also watch out for extra heads, which fly in from either side of the screen.

After defeating the cross, Rick approaches an alter. Church music (resembling an organ) plays, while Rick stares, wating for it to stop (the player cannot control Rick during this time). When the organ stops, more chaotic sting plays, followed immediately by Jennifer's screams of terror.