"Make a wish? Okay, I want us to be together until the end of the world." - Jennifer Willis

In the beginning of the first game, Rick and Jennifer went inside a mansion to hide from a storm, where Rick blacked out. He awakened with a mask on his face, and began a search to rescue her. At the end of the fifth level, Rick finds Jennifer caught in a room full of monsters. After the monsters run off, Jennifer is delighted to see Rick only to suddenly transform into another monster herself as the monsters had put a curse her beforehand. Rick is forced to fight her or die by her hands. She occasionally reverts into human form, whimpering and begging for help. Once she's defeated, Jenny reverts to her normal form one final time and thanks Rick before dying in his arms, sending an enraged Rick to destroy the haunted mansion.

This game begins with Jennifer mourning the loss of Rick over his grave at night, which is an immediate reversal to how it happened in the previous game. A bolt of lightning strikes the ground, revealing Rick (in a hockey mask) coming back to life. She is overjoyed as he looks confusingly, but another bolt hits the grave next to him and Kabocha Daiou (or Great Pumpkin King) rises and takes her away. With a cleaver in hand, he marches after them. Jennifer does not appear until the end of the game, after Kabocha Daiou's defeat. They celebrate by hugging, then the director of the game buds in and says he'd make a great actor. Rick takes the mask off (revealing his face) as the mask appears to gloat at the player. If two crystal balls are found during the game, it reveals Rick and Jennifer's future - the two will live happily, but tragedy will strike them once they approach a certain mansion, implying that this is a loose prequel.

In Splatterhouse 2, Rick learns that there is a way to save Jennifer and bring her back in one piece. Rick must journey to the depths of Shin Splatterhouse to find her. Rick finds her, before she's dragged down the void by several undead arms. In the void, Rick finds Jenny again, trapped inside a crystal. After breaking it, Jenny is brought back to life. However, a large ghostly figure chases after Rick and Jenny, forcing them to run. Rick defends Jennifer from the monsters of both mansions, until they're stopped by the Ultimate Evil. Jennifer hides while Rick fights the monster. After the Ultimate Evil is destroyed, the Terror Mask leaves them alone to have their moment together.

After the events of Splatterhouse 2, Rick and Jennifer married and had a son named David. Jennifer was attacked by a large monster and the Giant Boreworm, and was being slowly eaten from the inside out. Should Rick be able to kill the monster on time, the Terror Mask will inform Rick about the Boreworm inside her, If Rick managed to find the Giant Boreworm and kill it in time, Jennifer will be saved. If not, Jennifer will be killed, and turned into a mindless beast, forcing Rick to end her life as an act of mercy. There are four possible fates for Jennifer. If Rick manages to save her and David, they will both be alive by the end of the game and celebrate their survival after Rick destroys the Terror Mask. If Rick fails to save Jennifer, David will deliriously ask Rick where his mother is. If Rick fails to save David, both he and Jennifer will mourn their deceased son. If Rick fails to save both of them, he is alone in his mansion. The 100% ending where everyone survives is believed to be the canonical one.

Similar to the original Splatterhouse game, she is kidnapped by evil forces led by Dr. Henry West. This forces Rick to don the Terror Mask and try to save her. The purpose for Jennifer's visit to West Mansion is to write an article on the reclusive doctor for the Miskatonic University newspaper. West requested that she come alone, however Rick went with her. Rick claimed that this was due to the couple having a date planned after the interview was over, while West surmised that Rick's presence was meant to protect his girlfriend. After his minions disembowel Rick, West takes Jennifer and begins to drag her through the mansion and ultimately through time and space into even more twisted and gruesome places, despite her attempts to struggle and escape. Jennifer uses ripped pieces of her photos as a guide for Rick to help him find her, some are extremely revealing. She is one of the keys to West's plot. He intends to sacrifice her in order to bring back Leonora, his dead wife, who bears a striking resemblance toward Jennifer. In the end, Rick saves Jen from being sacrificed by West and killed by The Corrupted. Unbeknownst to him, she is possessed by an unknown being and the game ends in a cliffhanger as her eyes change to black and she proclaims that "it is good to be back", meaning that Jennifer is now possessed by some entity.

"Jennifer doesn't care what other people say about her. She doesn't care that she's too good for Rick, too good-looking to waste time with science, too sweet to listen to that kind of music. It doesn't matter because she's happy and in love." - Splatterhouse (2010) website

"Most people at the university think Jen is too hot for Rick, but she doesn't care much about what other people think. Now she is in the fight for her life and is dying to get back in the hands of her true love." - Splatterhouse (2010) instruction manual

Jennifer is the kind of person who doesn't care what other people think about her, even though she is described as being one of the most beautiful women attending Miskatonic University. This has made other students criticize her for being more interested in science than for her own beauty. Aside from science, Jennifer has an interest in photography and heavy metal rock music.

Jennifer deeply loves and cares for Rick, stating that she would do anything for him, just as he would do anything for her. Jennifer also tends to think of Rick as her personal "knight in shining armor", as influenced by one of her dreams. Jennifer has a danger-prone streak, as she always gets kidnapped or attacked by a monster in each game. She is pretty strong for her size, as she managed to dig an old ritual dagger through Dr. West's skull.

One of Jenny's fates in Splatterhouse 3 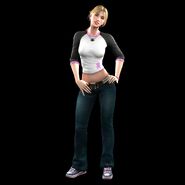 The previous phase to Mindless Beast
Community content is available under CC-BY-SA unless otherwise noted.
Advertisement