We're Getting Mutants in the MCU - The Loop

"Rick learns of humanity's fate, and his part in it. An anattoir for men, their meats nearly stripped from their bones. But it might not be too late. Rick butchers the butcher; West and Jen slip through his fingers and into another portal."

{The current progress of the eclipse is shown.}

{The game starts up. Rick is standing by a metal staircase with organic flesh on the walls.}

Terror Mask: reminds me of home...

{Rick goes up the staircase and finds of giant wall of flesh.}

Terror Mask: Get a load of this thing, huh? Break it open!

{Rick punches the wall until is starts glowing white. The console's "grab command" button comes up. Rick grabs the wall, and tears it open. A large hole is made, with a large amount of blood being flooded onto the ground.}

{Rick then goes through the hole and continues until he finds a door with a 2x4 near it. Rick kicks open the door, which leads to a long hallway with windows going down it. Through the windows, several Homini can be seen running along pipes. Rick starts going down the hallway.}

Terror Mask: That ain't the Corrupted, just groupies and wannabes. Trust me, if that was the Corrupted, your brains would be leaking out your nose right about now.

{A Homini jumps down from the ceiling, and starts running away.}

Terror Mask: Get it!

{Rick chases after the Homini, and enters a large room. Several more Homini start entering the room. A camera comes down from the ceiling. An odd chuckle is heard, and echoes through the wall.}

Terror Mask: Oh, this is gonna be fun.

{Rick fights off the monsters, until a door opens. The camera changes its position. Again, the odd chuckle is heard.} 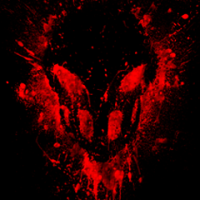