An ancient relic of unspeakable power, the Terror Mask is bonded to Rick in each "Splatterhouse" game. It transforms Rick's body, granting him Absolute strength and stamina. It is possessed by an immortal inter-dimensional being that was banished from its own world. This unknown Entity constantly talks to Rick and guides his actions throughout the series, but its motives are a mystery even to Rick.

The mask mysteriously attaches itself to a mortally wounded Rick, guiding him in his search for Jennifer. After destroying the mansion, the mask seems to detach itself and fall to pieces. But after the credits, it magically reassembles itself and laughs. This does not happen in the TurboGrafx-16 version, but in that version the mask is given a name and small backstory - it is known as the Terror Mask (Hell Mask in Japanese), and is an ancient relic previously owned by Dr. West that grants supernatural powers.

The mask is not given a clear purpose in this game - it is simply worn by Rick at the beginning of the game without context, and Rick keeps it on for the rest of the game. The game has a bit of a joke ending where the director of the game comes up and says it'll make a good movie. At this point, Rick finally takes the mask off, revealing his face for the first time in the series before walking off. The mask then comes to life and demonstrates some telekinesis for the player, leaving it open as to whether it was really an act after all. As the game is a vague prequel with questionable canonicity, it's unknown if this is even the same mask, as it is also unnamed much like its predecessor's original Arcade release.

The Terror Mask's spirit contacts Rick telepathically, telling him Jennifer isn't necessarily dead and there's still a chance to save her. When Rick returns to the ruins of West Mansion, the Terror Mask is there waiting for him. Rick begins his journey to Shin Splatterhouse, having been promised that there's a way to bring Jennifer back. Inside, Rick finds a diary belonging to "West" that describes the method of opening a gate to the land of the dead. After rescuing Jennifer from the dead's grasp in the void, they all escape the mansion as its island sinks into the lake. With their mission accomplished, the mask leaves Rick to be alone with Jennifer. In the original Japanese release, the mask ominously tells Rick not to forget that he removed the "forbidden seal" to do the deed. In the English and 2010 releases, Rick instead contemplates the mask's existence, saying as long as it exists, the same disaster could happen time and time again.

When demonic forces of evil invade Rick and Jennifer's home due to the same seal required to be broken to save Jennifer's life, the Terror Mask comes to Rick, once again offering the power he needs to fight back. By the end of the game, it is revealed that the mask's spirit has been manipulating Rick all along, waiting for the chance to take over this dimension. The spirit leaves the Mask, inhabiting the remains of the Evil One and attempts to destroy Rick. However, since the power of the mask is still with him, Rick defeats the spirit once and for all.

The Terror Mask was an artifact owned by Dr. Henry West. It was discovered within an Aztec coffin, still attached to the withered and crumbling body of a past host. Through one of West's diary's, it is believed that he had the mask

for quite some time before Rick started using it, and assumed that it possessed incredible powers. However, the Mask never spoke to Dr. West, and he later just assumed it to be an ordinary sacrifical mask made from bone. After Rick Taylor lay on the floor dying from a Ghast attack, the spirit within the Mask speaks to him, offering the power to fight against Dr. West and rescue Jennifer Willis. When Rick puts it on, he forcibly transforms his body into Rick's Berserker form and fights off some Ghasts itself. But for the sake of Rick's untrained and fragile body, it dials back the power and gives Rick control again.

The spirit within the Terror Mask is rude and violent, often reveling in the carnage Rick causes and insulting him when Rick fails at something. It serves as a source of information for Rick, giving commentary about creatures and locations it knows about and motivates him through insults. It tells Rick that for an eternity, it was a slave of The Corrupted, but it's unknown as to the extent of its servitude. It's responsible for the extinction of past civilizations, such as the Mayans or Aztecs, without even knowing which ones it wiped out.

Unfortunately, it turns out that the Mask's spirit has been manipulating Rick to a certain extent. In the end, when Dr. West tries to sacrifice Jennifer to the Corrupted, Rick prevents the sacrifice, but one of the Corrupted still manifests into Rick's dimension. It starts to create a giant body composed of all the creatures Rick has killed on his journey. The Mask explains that this was its plan: sacrifice 10,000 souls to bring one of the Corrupted into the open, so it can have its own bloody revenge for what it called an eternity of agony. After defeating the Corrupted, the spirit revels in its victory, while Rick attempts to remove the Mask, though the spirit inside refuses to let go stating that their deal still isn't done, suggesting something is still wrong with Jennifer as the game ends on a cliffhanger.

The Terror Mask grants several powerful abilities to its wearer, making them much  bulkier and Hulk-like compared to their normal appearance. It also has the ability to heal even the grievous wounds, such as deep lacerations and limb-loss. These abilities can become even stronger by absorbing all the blood shed by its victims. Finally, when enough blood has been absorbed, the wearer can transform even further, making them bigger than before, growing bone-like blades from their body, and allowing the Mask's spirit to take over temporarily. The Mask can also create portals when enough blood has been spilled by the host.

In the 2010 game, some of the Mask's quips after Rick dies suggest it also has the power to bring him back to life after the player chooses to continue, likely reversing time a short amount to the last in-game checkpoint.

The Mask's appearance as the last boss in Splatterhouse 3. 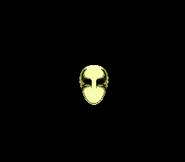 The Terror Mask in the original Japanese release of Splatterhouse 2 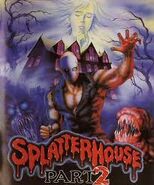 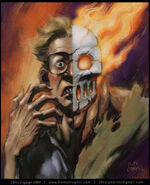 one design that was drop because developers though it looked like ghost rider
Community content is available under CC-BY-SA unless otherwise noted.
Advertisement